skip to main | skip to sidebar

Mitzi and the Zombie Trees 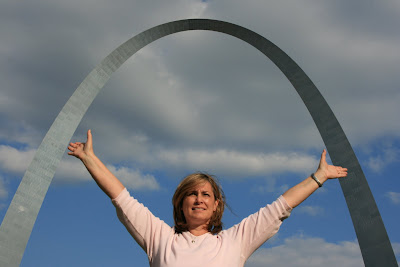 Last summer my wife and I were on vacation in St. Louis. 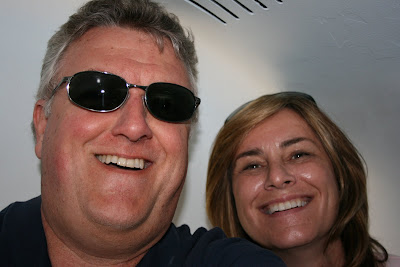 We stopped at the gateway arch to take pictures inside and out. While walking around the park under the arch, I noticed a clump of ash that could provide some welcome shade. What I found was a whole stand of zombie trees. The living dead. 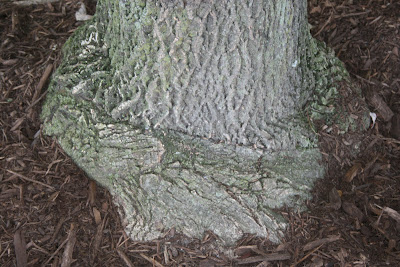 The ash above is in a death grip. A death grip of circling roots girdling the tree.

Girdling roots are a common problem transplanted trees such as B&B or balled and burlap trees. Planting large trees like this means you are likely to get a damaged root system and a short life span. Planting small seedlings avoids this problem and grows a tree in place with a natural root structure and the potential for a long life.

The young oak below was planted as a seedling at Lincoln's Tomb in Springfield, IL. Notice the radial root supporting the oak. The folks managing Lincoln's Tomb want oaks and they want oaks that will live well over 100 years. 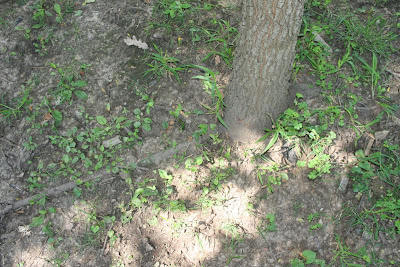 This oak tree was protected with a tree tube or tree shelter when planted. That is the secret - use a Plantra Tree Tube and plant small seedlings to produce a normal root system that will support your tree for 100 years or more.

If you want more information on trees and root systems in landscapes go to Ed Gilman's web page hosted by the University of Florida.
Posted by Joe Lais at 10:13 PM No comments: Links to this post

Seedlings in Buckets or Zombie Trees in Trucks

Did your zombie trees arrive one at a time in a diesel powered truck or...

...did someone hand carry 100 growing oaks up a hill to the planting site?


Moving a large tree is not the same as planting a seedling. As big as the ball of dirt looks on a moved tree, 95% of the root system was left in the ground at the nursery when the tree spade severed the root system. Sadly, the shattered ends of the severed root system will produce a thousand new roots with no room to grow and the tree will die before well its time.

Excuses will be made for a lack of or too much water. Some will blame the tree spade company, but the truth is the tree went into the ground a zombie - the living dead.

Plant a seedling. It will grow into a great tree. No more zombie trees!

Gosh, and I didn't even mention the carbon footprint of a zombie tree. This is starting to get scary.
Posted by Joseph Lais at 10:20 PM No comments: Links to this post

I can't help but comment on the disheartening story first published in last Friday's Minneapolis Star-Tribune. On October 20 someone stole several plants of a very promising new grape variety. The first question is, of course, who? Followed closely by, why? Every variety introduced by the University of Minnesota represents the culmination of years of work, hundreds of crosses, and untold hours spent in evaluation.

To understand the importance of what they do, you have to go back in time. According to Minnesota Harvest, "In 1860, Horace Greeley told his audience, "Never move to Minnesota...you can't grow apples there!" This was the same Horace Greeley who was responsible for the grand command of the century, "Go West, Young Man!" For Minnesota, a pioneer land only two years into statehood, such a reputation was sure to be detrimental to efforts aimed at attracting westward-moving Easterners to settle here.

"His apple statement was true at the time. But even as Greeley spoke, a fruit-loving Minnesotan was planting and evaluating apple trees started with seeds collected from northern sources, even some from Siberia."

Somehow the fact that in order to grow apple trees in Minnesota you needed to collect seed from Siberia never made it into Minnesota's tourism brochures (Minnesota: It's like Siberia, but closer!). While Greely was disparaging Minnesota's apple growing capacity, Peter Gideon was busy breeding cold hardy applies. The name Peter apparently is an important prerequisite for skilled plant breeders in Minnesota: Peter Moe is the operations director at the University of Minnesota Arboretum, and Peter Hemstad has been responsible for the launch of many important new varieties.

The UofM launched the amazing Honey Crisp apple, which has generated $8 million in royalties for the state. Whether or not the stolen variety would have become the Honey Crisp of the (fast growing) Midwest vineyard industry we might never know - but hopefully the plant material will be recovered and we'll find out. We do know that the UofM has already introduced several important grapevine varieties including Frontenac and Marquette which are used by folks like our friends at Cannon River Winery to produce home-grown Minnesota wines that would have impressed even Mr. Horace Greeley!

We wish the University of Minnesota the best of luck in recovering the stolen plant material (and that it is in a condition that will allow for its regeneration), and in finding effective ways to prevent similar losses in the future.

Frontenac grapevines planted in spring, 2009 at Cannon Valley Vineyards with Plantra Grow Tubes. Planted in May, photo taken June 24.
Posted by Chris Siems at 9:24 AM No comments: Links to this post

Tree Planting as an Event

Bonnie Lawrence knows how to throw a tree planting party. The city hauled out the portable band shell. Personally, I've never planted trees accompanied by a live band, but Bonnie has. 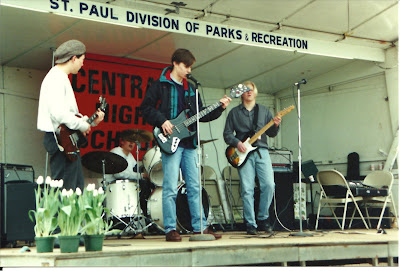 If I can be allowed to coin a phrase, Bonnie Lawrence is a Community Tree Planting Organizer or CTPO. Below Bonnie is receiving one of the many awards she has received for making St. Paul, Minnesota a better place to live.

She was the driving force behind the 1991 and 1992 tree planting at Central High School in St. Paul, Minnesota.

Central had 66 trees in their original plan. many of those trees died over the years and Lawrence thought "it would be a nice idea to get some trees planted." She believes that it's important for people to take back the responsibility for their neighborhoods, including the planting and maintenance of trees. 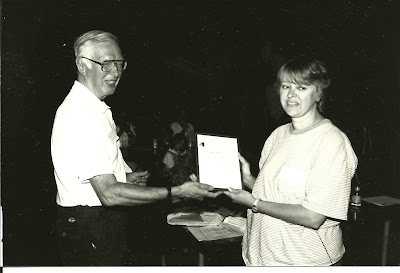 One of the most incredible aspects of the Central High School tree planting is how much publicity it received and how many politicians wanted to be associated with it. 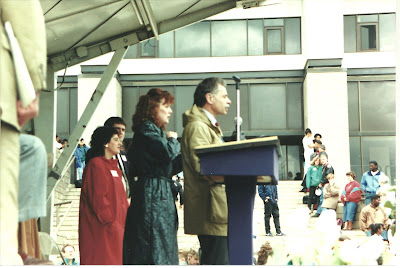 This is then Minnesota Governor Arne Carlson 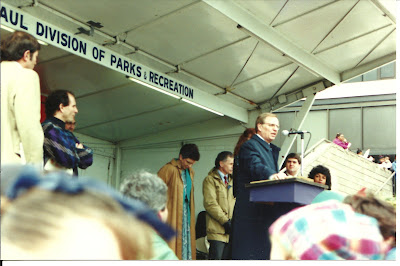 The late Senator Paul Wellstone lived nearby and also spoke and participated. 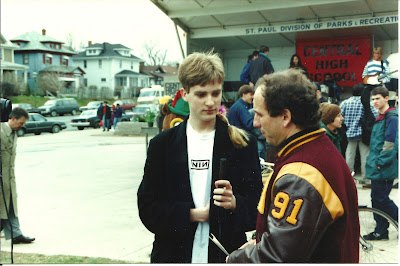 Arbor Day provided a permanent plaque to commemorate the planting. 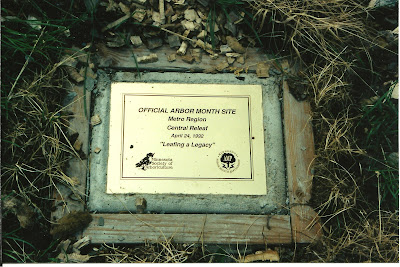 Wish I had a better picture to capture how the trees have matured and created a campus atmosphere. That picture will have to wait for the green leaves of spring. 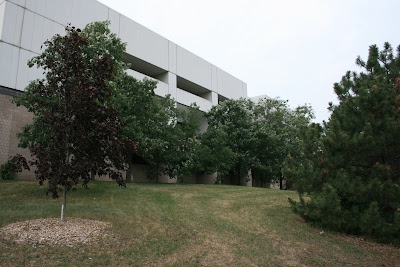 As someone who has lived my entire life near CHS, Thanks Bonnie
Posted by Joseph Lais at 5:50 PM No comments: Links to this post 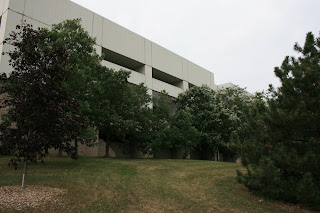 Back in July I put together a post on the Great Central High School Urban Reforestation. Since then I have scanned 70 pictures from the original planting and learned a great deal from the woman responsible for it.

There are so many interesting things about this project I plan to break it into bits.

To me the most amazing thing about this planting is that a grove of bur oaks or any tree for that matter could start out as a tiny seedling. Those trees were seedlings in a bucket in 1991. The reason we can enjoy them today is that Bonnie Lawrence had the forsight and courage to put them in tree tubes. 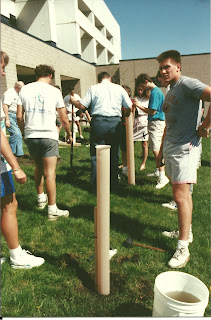 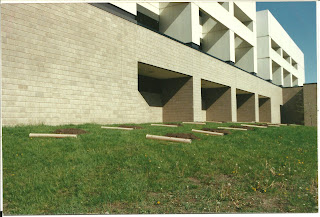 This is what it looked like at the start.
Posted by Joseph Lais at 11:13 PM No comments: Links to this post

Plantra is dedicated to successful woody plant establishment - in the forest, vineyard, orchard, windbreak or simply your back yard.

Our customers are the smartest, coolest people we know. Every day we have great conversations and email exchanges where we learn something new about successful tree, shrub and vine establishment.

We started the Plantra Success blog in order to chronicle and share those conversations - a gathering place and forum for great ideas and field proven tips and tricks.

If you have an idea for a post, please email us at info@plantra.com.